“Any innocent soul checkmated by death in cold blood is like killing in pogroms.”

The first act of terrorism against the fourth estate of the realm took place in Nigeria on that tragic Sunday(October 19th, 1986) when a 39-year-old investigative journalist and Editor-in-chief of Newswatch magazine, Dele Giwa was brutally assassinated through the novel instrumentality of a parcel bomb in his Lagos residence.

Giwa once stated that journalism is unarguably one of the most dangerous professions in the universe.

Just like Jamal Khashoggi, born not only with a silver spoon but with a golden spoon in oil-rich Kingdom of Saudi Arabia and as the nephew of the late Arabian billionaire and high-profile  arms dealer, Adnan Khashoggi, Dele Giwa was born in another oil-rich country, Nigeria, with either a wooden spoon carved with precision from a possessed Iroko tree or no spoon at all, his poor father worked as a laundryman  at Oduduwa College, Ile-Ife and later at the Palace of late Ooni of Ife, Oba Adesoji Aderemi.

When his father moved to Oduduwa College, Ile-Ife as a laundryman, he gained admission to that school. After his education in the United States of America, Giwa worked for The New York Times as a news assistant for four years and relocated to Nigeria to work with Daily Times, Concord Newspapers and then he established Newswatch in 1984 with his three friends, Ray Ekpu, Dan Agbese and Yakubu Mohammed. That’s the origin of the media revolution in Nigeria.

Dele Giwa struggled against the hydra-headed monster codenamed poverty until his final breakthrough in journalism. He was once quoted as saying, “Poverty is only good in sermons but very bad in practice.”

Both Giwa and Khashoggi vanished in the month of October. In the case of Jamal Khashoggi, on October 2nd, Khashoggi entered the Saudi Arabian consulate in Istanbul to obtain documents related to his marriage; he never left the building and was subsequently declared a missing (presumed dead?)person till today. Khashoggi’s fiancée who waited outside the consulate raised an alarm when Jamal did not come out for over 6 hours. The lady is the only witness who saw Jamal last as he entered the Consulate, and recent CCTV camera also confirmed Jamal’s entry but no exit till this moment.

The Saudi Arabian government claimed that Khashoggi left the consulate alive through a rear entrance, but Turkish police said that no CCTV recorded him exiting the consulate. 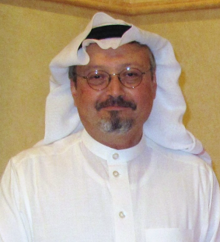 Dele Giwa’s son(Billy) received a parcel bomb through a dispatch rider allegedly sent to his father by the Nigerian military government under President Ibrahim Babangida on Sunday 19th October, 1986.

Giwa went to a corner of his sitting room to open the large brown envelope  and said, “This parcel must be from the Mr.President.”

The assassination occurred two days after he had been interviewed by State Security Service (SSS) officials.Kayode Soyinka who was then the Bureau Chief of Newswatch was with him when the parcel bomb exploded and Giwa allegedly said :”Oh, they got me at last!”

Dele Giwa had many friends within the Nigerian military and was believed to be in custody of many government ‘dark’ secrets.  Jamal Khashoggi once worked for the Saudi Arabian royals and top politicians in the middle east.

Dele Giwa’s assassination sent shock waves to every corner of Nigeria and the killers are still walking free despite the efforts of concerned Nigerians and Chief Gani Fawehinmi(SAN) who was Giwa’s lawyer.

Jamal Khashoggi vanished eleven days before his 60th birthday while Dele Giwa was assassinated five months before his 40th  birthday.

Jamal’s uncle(Billionaire Adnan Khashoggi) was implicated in Iran-Contra scandals of the 1980s.

The Iran–Contra affair, also referred to as Irangate, Contragate or the Iran–Contra scandal, was a political scandal in the United States that occurred during the second term of the Ronald Reagan Administration. Senior administration officials secretly facilitated the sale of arms to Iran, which was the subject of an arms embargo.

Dele Giwa was also wrongly accused of gun-running by the Nigerian military, plotting to import weapons into Nigeria to start a revolution. That was like giving the dog a bad name to hang the four-legged animal!

Jamal Khashoggi was an unrepentant critic of Saudi establishment despite his close association with some top Saudi royals, he strongly advocated and campaigned for reforms in the conservative Islamic Kingdom.

Khashoggi received his elementary and secondary education in Medina Saudi Arabia and obtained a bachelor’s degree in business administration from Indiana State University in the United States in 1982. He could be described as a self-trained journalist and writer who worked for top Arabian newspapers as a foreign correspondent and editor and also a regular columnist with The Washington Post.

Dan Agbese, a close associate of Giwa once said : “Dele Giwa was a dedicated journalist. He loved journalism. He lived for journalism. His passion for professional excellence and integrity defined Newswatch magazine, of which he was the founding editor-in-chief/chief executive. Newswatch was not just a new publication. It was a bold and untried venture in Nigerian journalism. If Time and Newsweek pioneered the newsmagazine in the United States, Newswatch blazed that trail in Nigeria.”

Dele Giwa, a brilliant young Nigerian man, travelled to the USA for his higher education, earning a BA in English from Brooklyn College in 1977 and enrolled for a Graduate program at Fordham University in New York.

In 2008, the Government of Nigeria named a street in the new Federal Capital Abuja after Dele Giwa, as they did with other activists such as Fela Anikulapo-Kuti and Ken Saro Wiwa.

Jamal Khashoggi met Al-Qaeda leader, Osama Bin Laden and interviewed him many times, Dele Giwa also met and interviewed the suspected drug trafficker, Gloria Okon in London and was allegedly planning to publish the exclusive interview before his brutal assassination through the parcel bomb on October 19th, 1986.

As the disappearance of Jamal Khashoggi at the Saudi Arabia Consulate in Turkey on October 2nd, 2018 is still burning like a wildfire all over the world, Nigerians are still asking the same controversial question after 32 years of Dele Giwa’s death : WHO KILLED DELE GIWA?

May your revolutionary souls continue to rest in perfect peace because your killers have murdered sleep and they shall sleep no more.

***Jamal Khashoggi died inside Saudi consulate in Turkey after a fight with officials.
-Saudi Arabia govt admits at last on Saturday, October 20th, 2018.
For additional info, please read this :

October 18, 2018
Copyright (c) 2018 - Dare Lasisi Online - All Rights Reserved
Back to top
error:
You Are Not Permitted To Copy Content of This Site. Contact The Admin