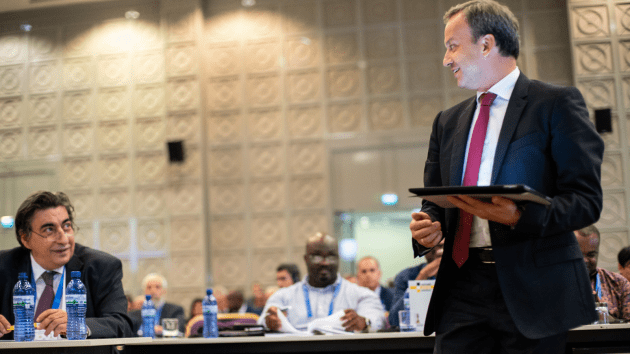 Dvorkovich (right) defeated Makropoulos, who was involved in FIDE since the 1980s. | Photo: Maria Emelianova/Chess.com.

Arkady Dvorkovich has been elected FID president for the coming four years at the World Chess Federation’s General Assembly in Batumi, Georgia. He defeated Georgios Makropoulos with 103 votes to 78 after Nigel Short withdrew his candidacy at the last minute.

The FIDE presidential elections took place in the Sheraton Batumi hotel in Georgia, where over 160 delegates had gathered for FIDE’s general assembly. First, all three candidates were given the opportunity to present their tickets and their plans to the assembly. 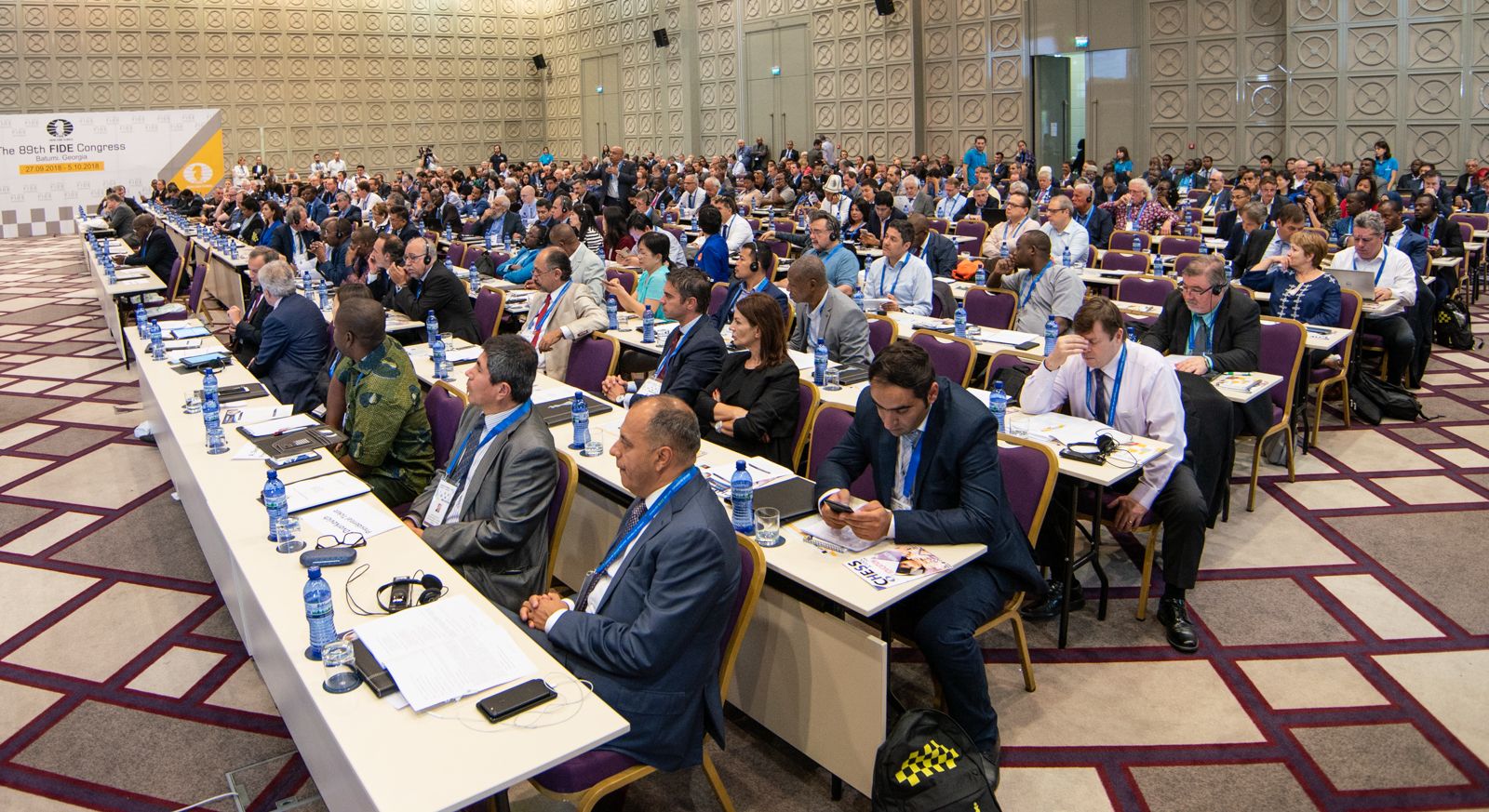 A drawing of lots had given Dvorkovich the starting number. International arbiter Carol Jarecki, who had been appointed as the chairperson of the scrutiny committee, accidentally introduced him as ‘grandmaster'” Dvorkovich. His team does include three GMs.

Reading from an iPad, Dvorkovich started by saying he wants to eliminate proxy voting, and plans to build “a professional, efficient and transparent institution.”

His message included a strive for strong management, long-term funding via corporate sponsors, cutting fees to FIDE, reviewing expenses, supporting commissions, and fixing imbalances with a team of experienced professionals. 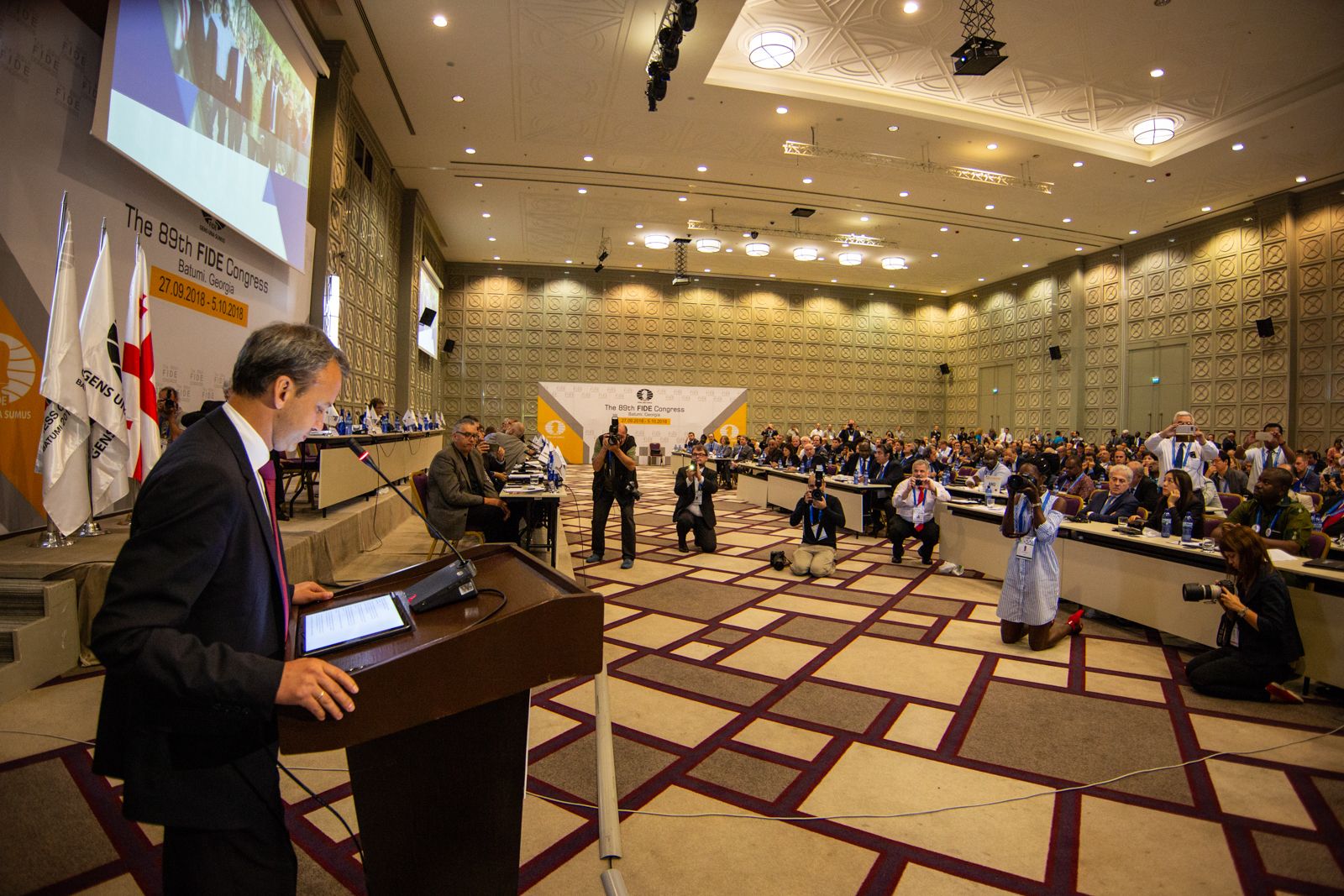 Dvorkovich laying out his plans for the future. | Photo: Maria Emelianova/Chess.com.

Dvorkovich didn’t hide his excitement as walked away, and first shook hands with his ticket members, and the other two candidates before sitting down.

Nigel Short started by reminding everyone of Ilyumzhinov’s fake promises in his speech four years ago. Short spoke of an “enormous potential” of chess that’s being wasted, and noted that 92 percent of FIDE’s revenue comes from the chess community. “You’re being milked by a very poor administration. It’s “Makroeconomics.”

Continuing in a determined manner, Short also strongly criticized the extension of the Agon contract, the travel expenses, and the lack of transparency around bank situation, calling it a “mismanagement on a gross scale.” He also spoke of an “open culture of bullying.” 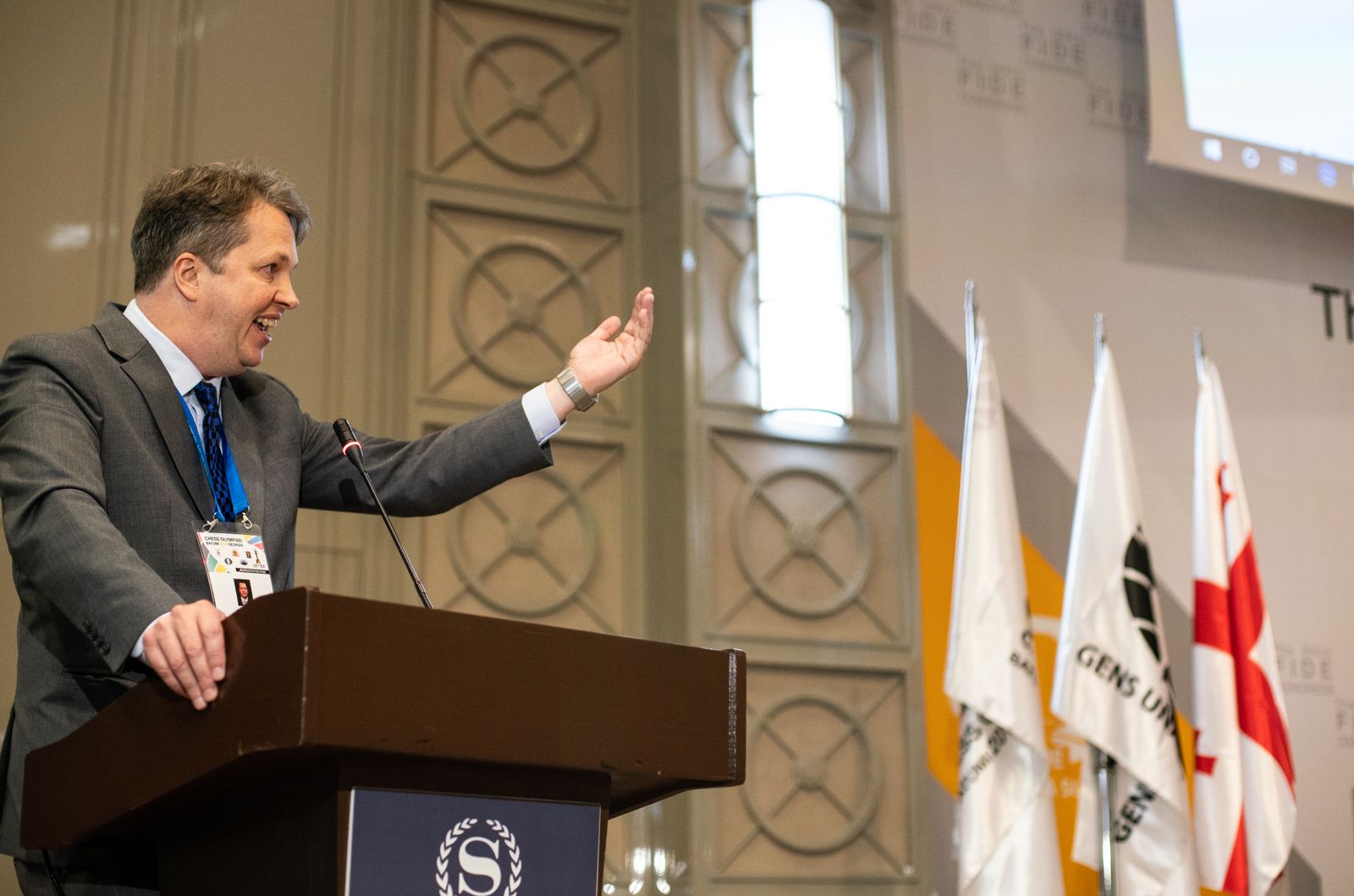 And then, he dropped a small bomb. Short announced his withdrawal from the race, and his support for Dvorkovich.

Short mentioned the “many common goals,” and noted Dvorkovich’s involvement in the organization of the FIFA World Cup in Russia.

He finished his speech with the remark “United, and not Liverpool,” which was a pun towards Malcolm Pein, on Makropoulos’s ticket and an avid Liverpool supporter.

Short’s withdrawal did not come as a total surprise to insiders, taking into account his modest campaign, and his openly siding with Dvorkovich the last few weeks.

Nonetheless, Short told Chess.com that the decision was made only a day before:

“We had a meeting yesterday morning,” said Short. “Not everybody was of the same opinion immediately, but we reached a consensus. A lot of people are in favor of change, and we know that many wanted to vote for me in the first round, and Arkady in the second. The slight danger there is: if I get too many votes. Psychologically it looks different after the first ballot. It’s basically an anti-Makro move.”

Meanwhile @nigelshortchess is being interviewed on his withdrawal. “We realized we wouldn’t win, and change is the main priority.” Plans on lunch and a few glasses of wine. pic.twitter.com/XhtbXR17P2

Short explained that during the campaign period they met more than once, and discovered that their ideas are very similar. Besides, he doesn’t have anti-Russian sentiments as strong as others—note that the English Chess Federation voted for Makropoulos partly because of the Skripal case.

Short: “Look, Russia is probably not my favorite country in the world, but we’ve had a Russian president [Ilyumzhinov –PD] for 23 years. Of more concern to me is the cronyism, and I could use another word beginning with ‘c,’ of the current administration. They’re absolutely hopeless, and nasty.” 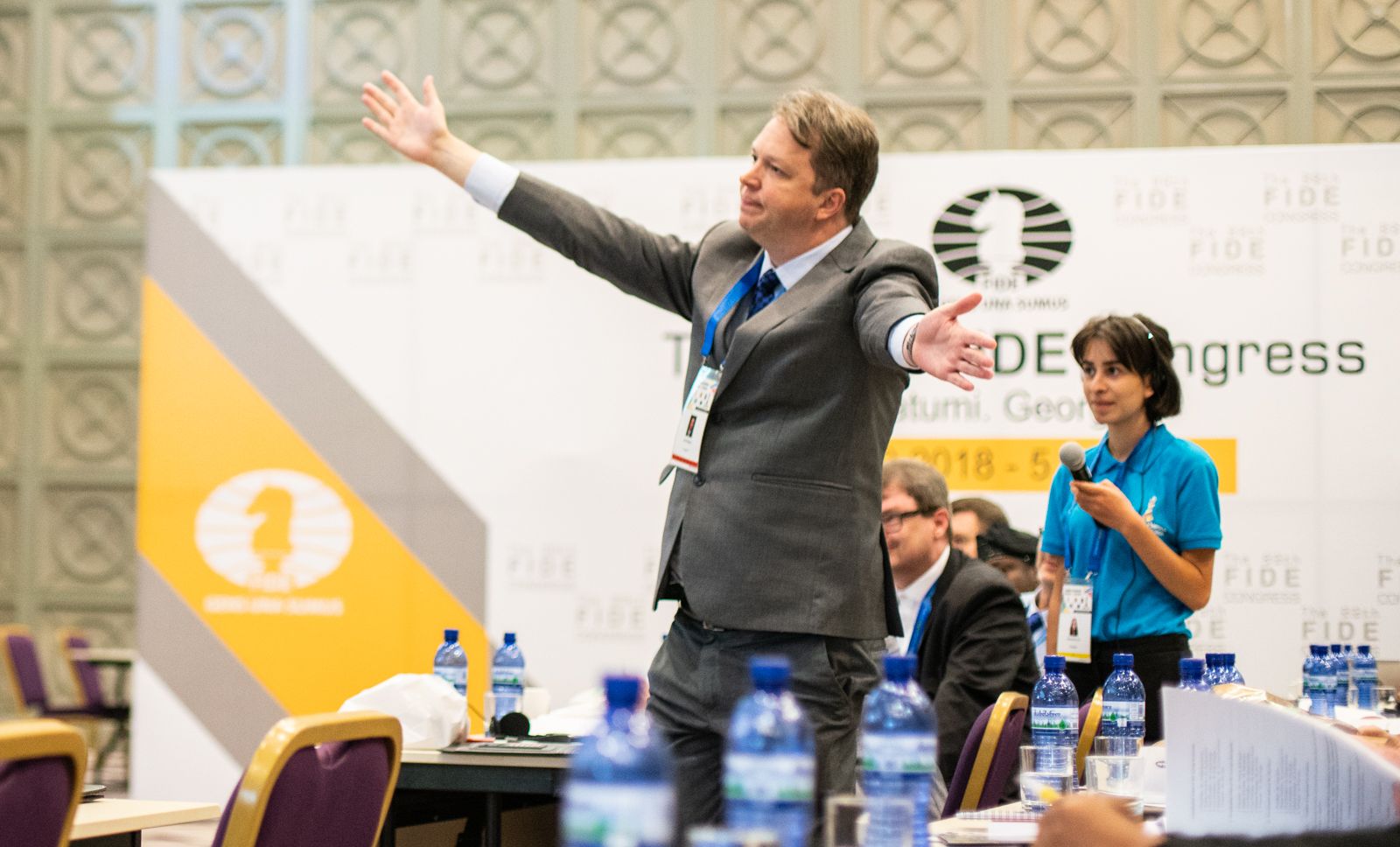 Georgios Makropoulos was the last to give his speech, and it lacked punch. He started by stating that he wouldn’t reply to Short, but did so anyway. He called Short’s withdrawal “dishonest” and summed up achievements in the past such as organizing Olympiads back in the 1980s.

Whatever one thinks about the 65-year-old Greek, it’s clear that he has dedicated his life to chess. “Of the three candidates, I am the only one who knows what the federations need” he said. He pleaded for “dignity and stability in the FIDE family,” but with less energy than usual.

Rest day for me in #BatumiChess2018. Watched little bit of chess election speeches (https://t.co/uKjh5z3XJT ). Its only me or Makro speech is looking like farewell words?

The voting was done with two delegates at the same time, but it nonetheless took more than 1.5 hours. The counting took another hour or so.

Suddenly Jarecki returned, and announced the numbers. One ballot was declared invalid as the committee could not establish the vote. And then, the actual result.

Sitting next to FIDE treasurer Adrian Siegel, Makropoulos shook a few hands as well, and then his son Iannis came, and hugged him. Three decades of working for FIDE had come to an end.

Dvorkovich is the successor of his compatriot Ilyumzhinov, who was president of FIDE between 1995 and 2018. Initially he was running for another term, but at the end of June he withdrew, after Russia had put Dvorkovich forward.

Ilyumzhinov was the second-longest tenured leader of the World Chess Federation in history. Alexander Rueb, the organization’s first president, held the position two years longer, from 1924 till 1949.

At the last elections, in 2014, Ilyumzhinov defeated Garry Kasparov convincingly. Only a year later, problems started when he was put on the sanctions list of the U.S. Department of the Treasury for providing support to the government of Syria.

Swiss bank UBS closed FIDE’s account because of this, and then Makropoulos announced his candidacy for FIDE president in April, thereby officially taking distance from the president he had served under for decades.

A new era for chess starts today—the post-Ilyumzhinov era. Regaining a bank account is one of many problems and challenges the new administration will need to address.

The FIDE Presidential Board before the elections. | Photo: Maria Emelianova/Chess.com. 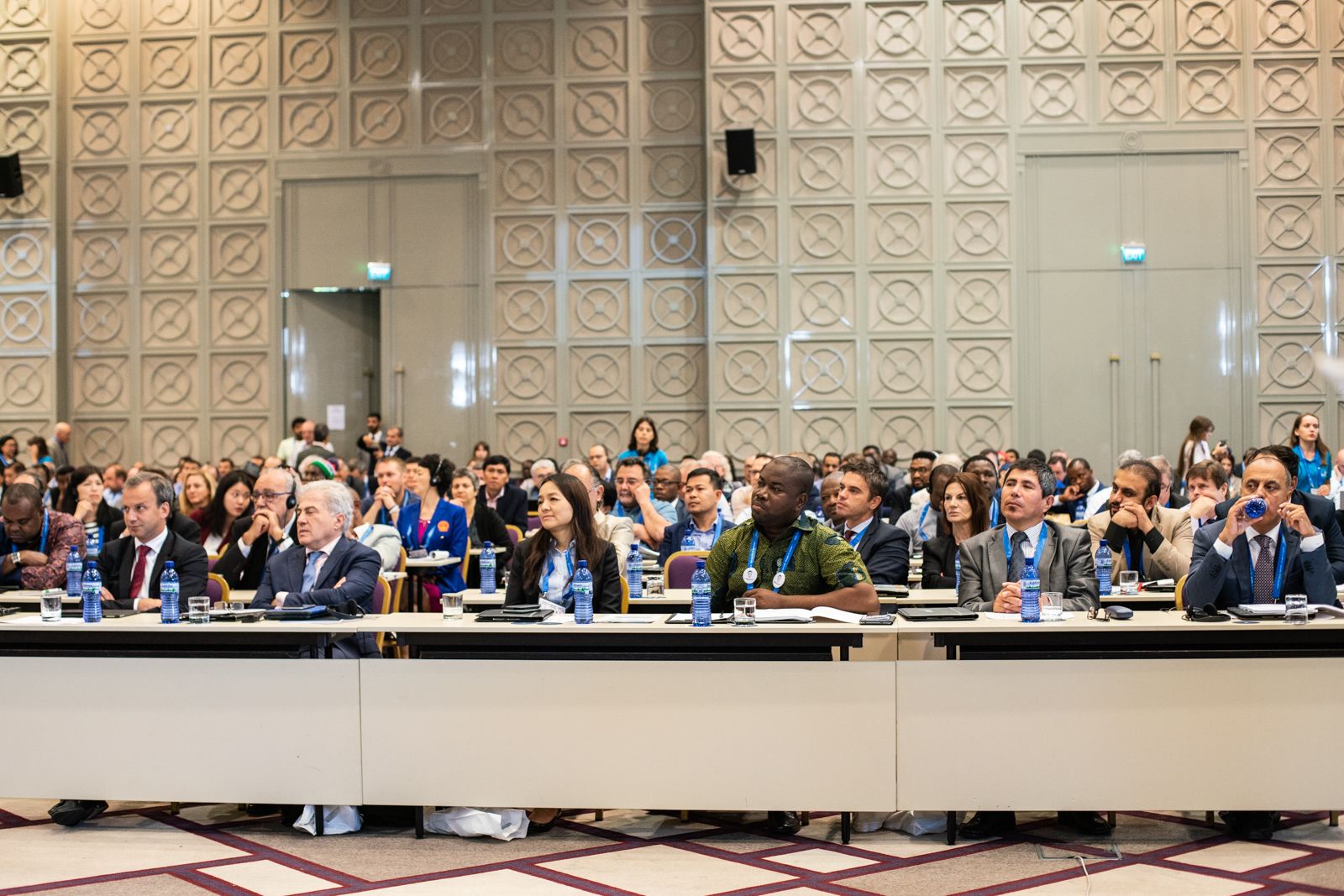 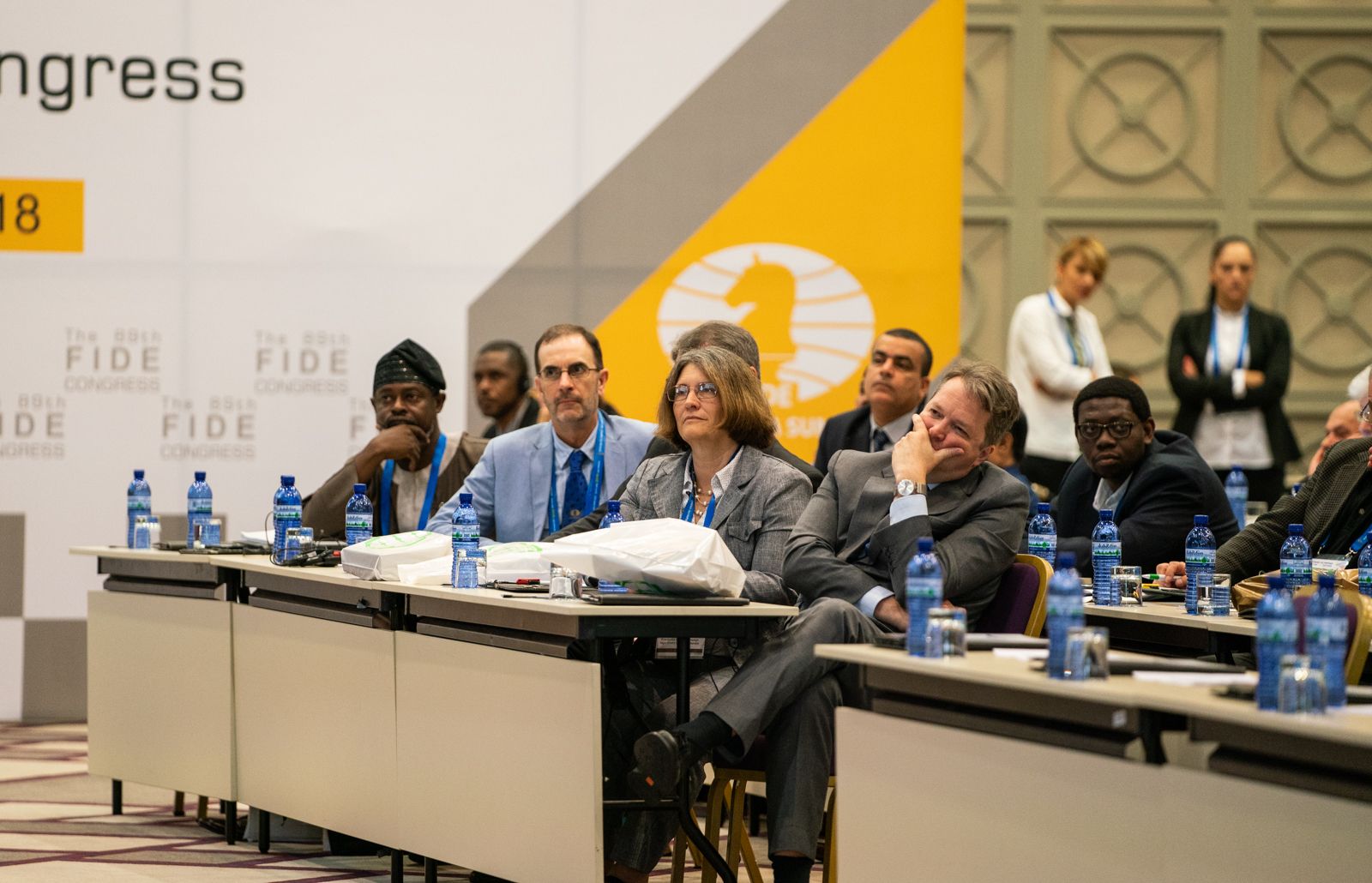 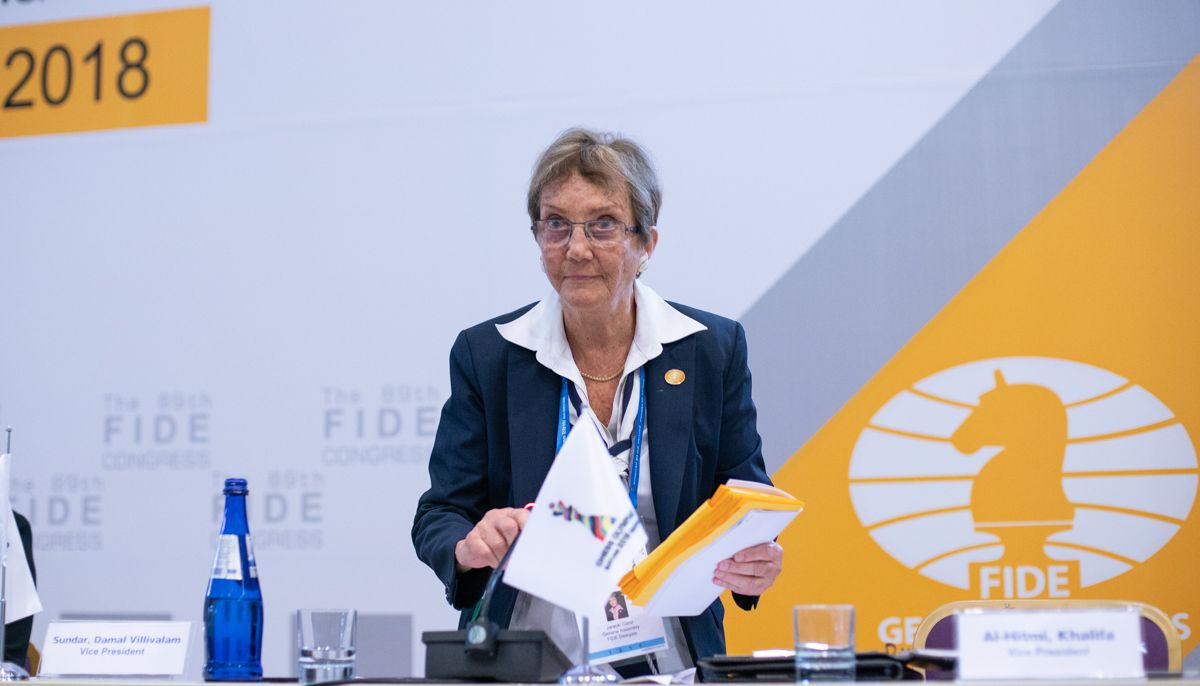 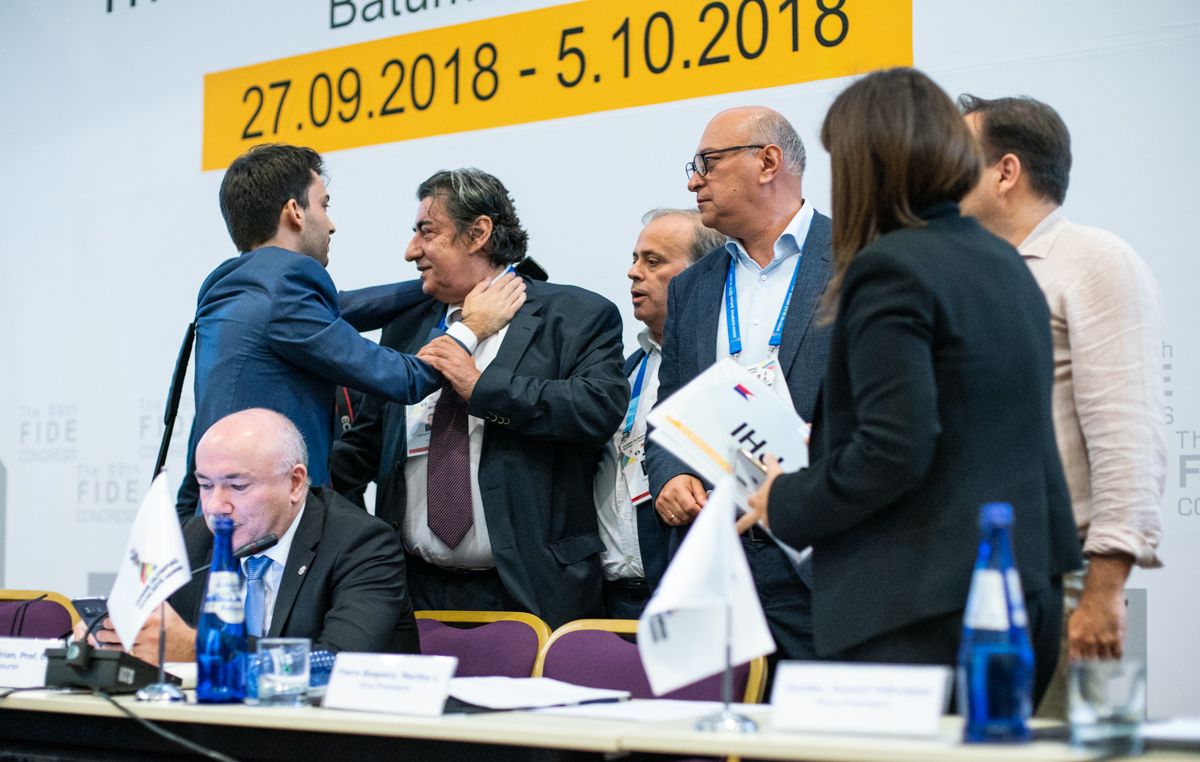 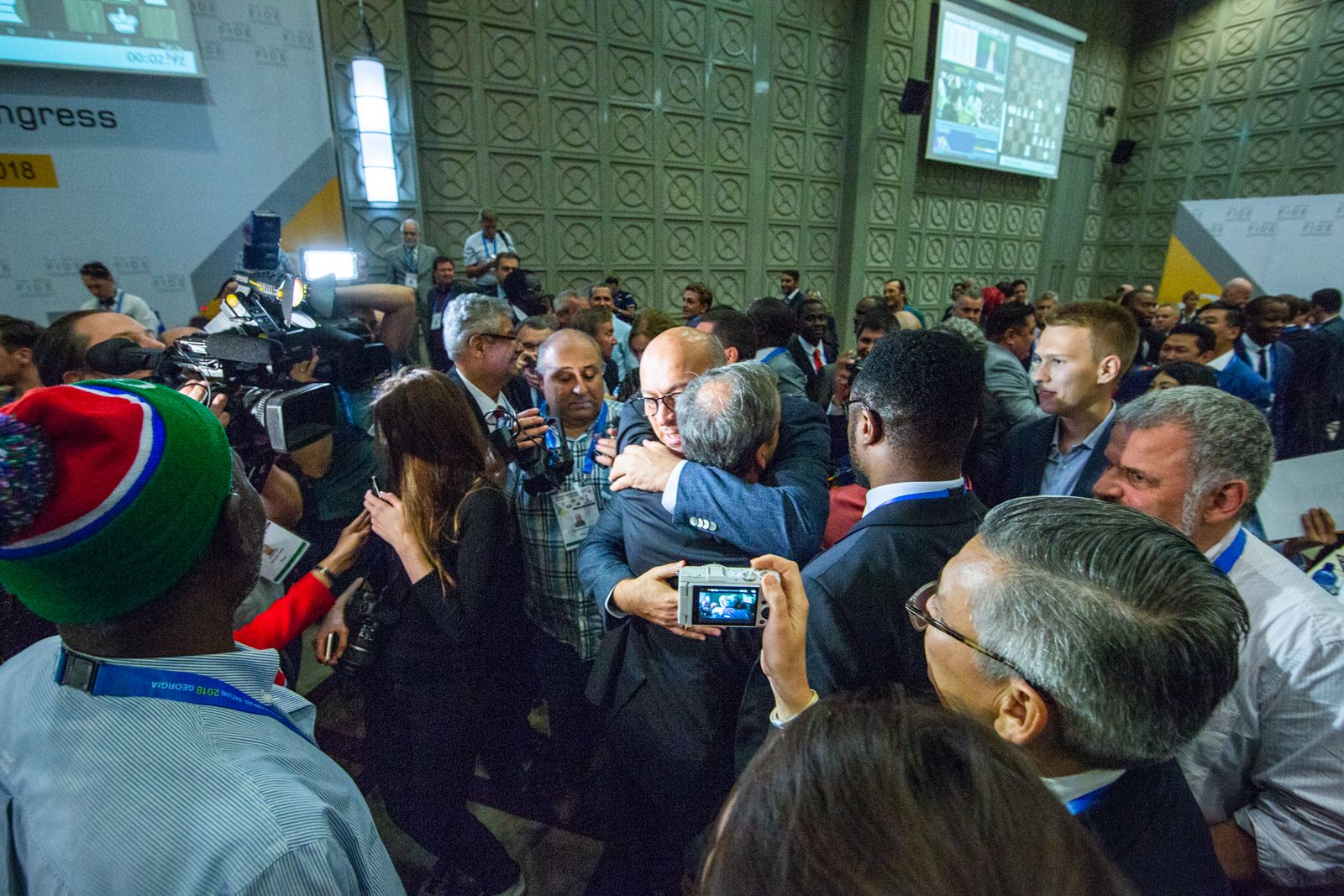 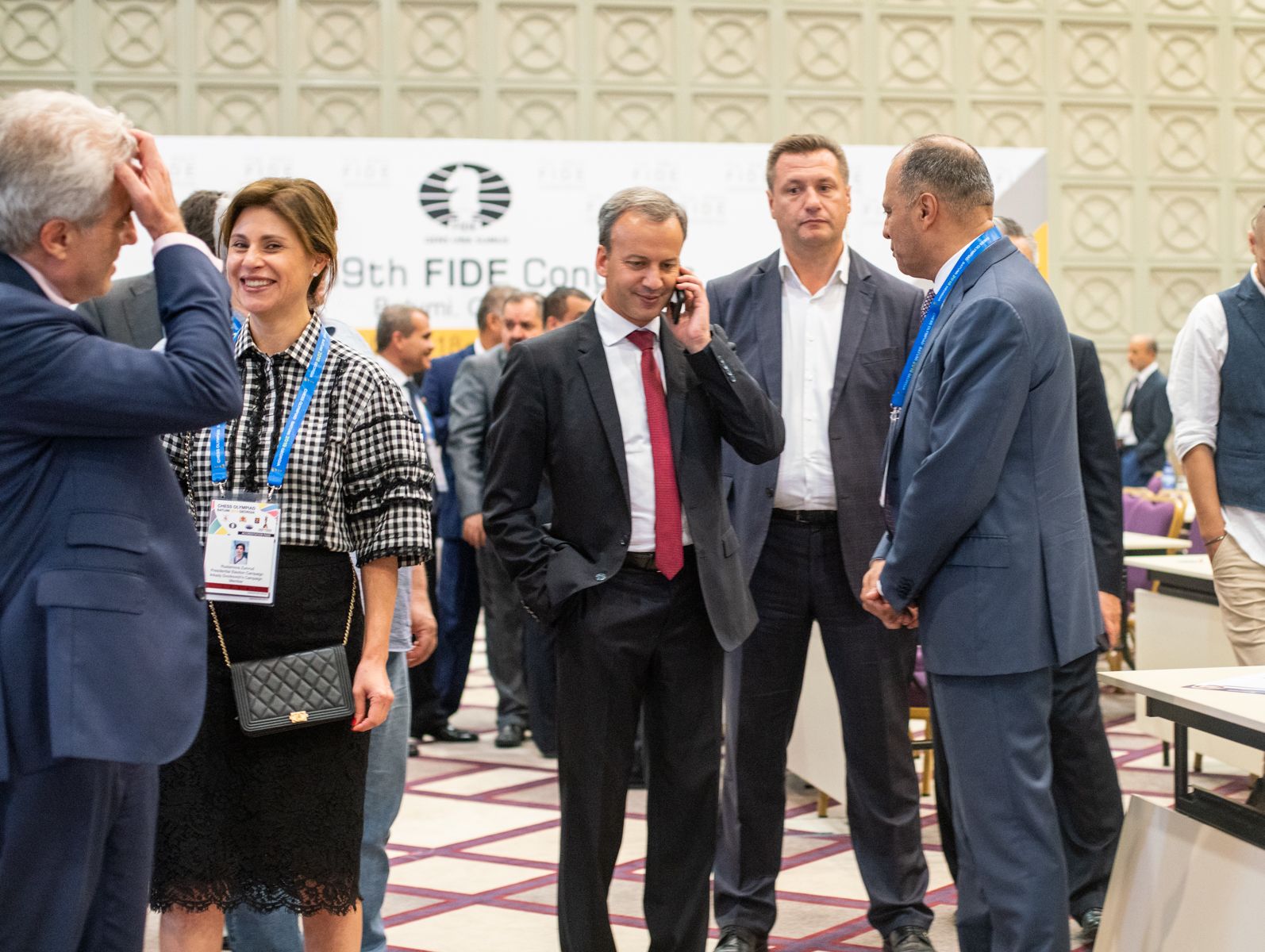 …and receiving a phone call from his mother. | Photo: Maria Emelianova/Chess.com. 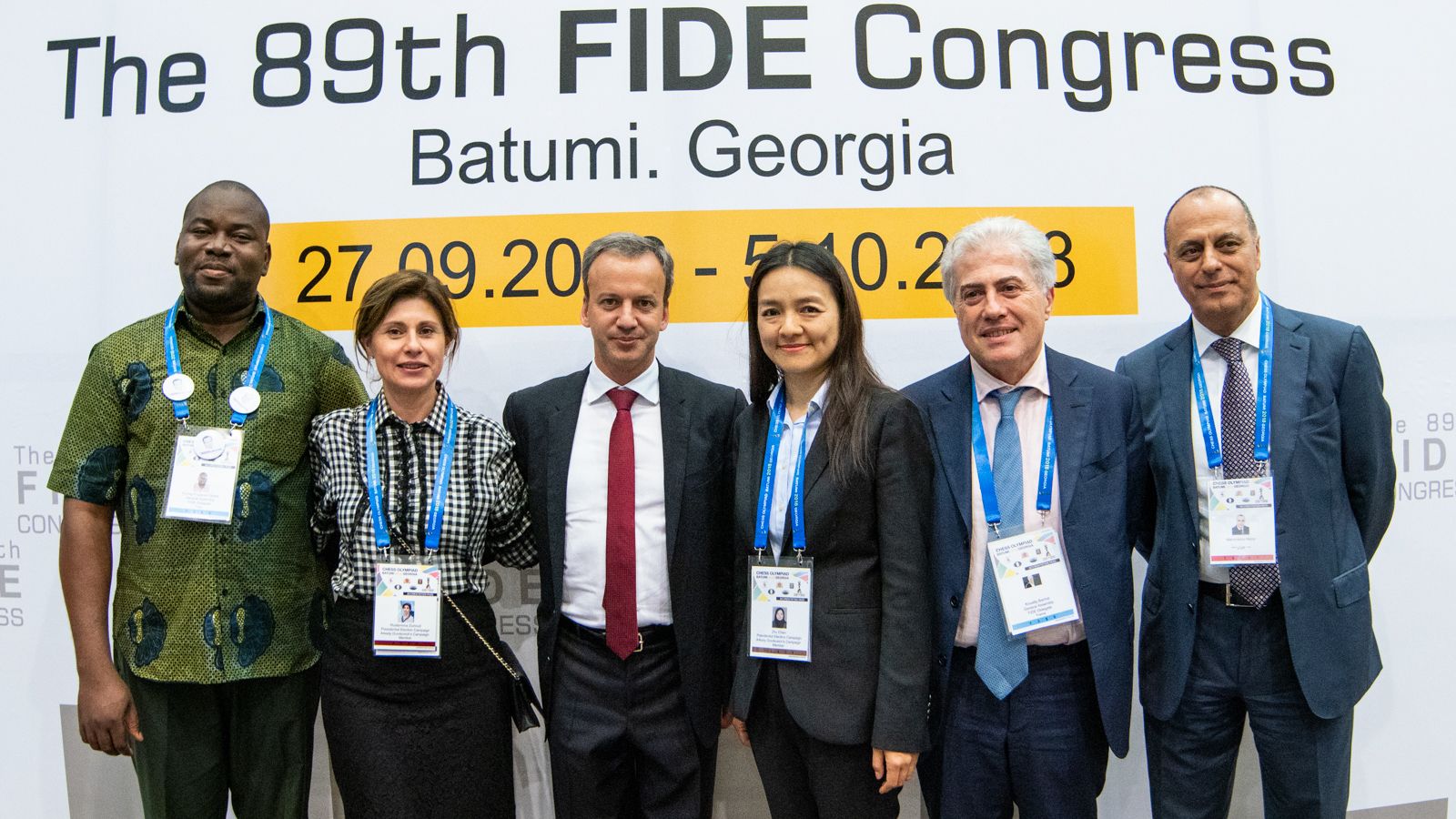 Good day sir,I hope your day is going on as expected? Please I want to advertise my products on your platform. Please kindly reply my message after receiving it. Thanks in anticipation……!!!

Buhari is a kind of person that he only needs to see a trusted person(like Tunde Idiagbon) and he hands over everything to the person....

October 4, 2018
Copyright (c) 2018 - Dare Lasisi Online - All Rights Reserved
Back to top
error:
You Are Not Permitted To Copy Content of This Site. Contact The Admin