Buhari is a kind of person that he only needs to see a trusted person(like Tunde Idiagbon) and he hands over everything to the person. Osinbajo is not Tunde Idiagbon. That’s not delegation, that’s abandonment.
—-Pastor Tunde Bakare. Pastor Tunde Bakare is a popular Nigerian pastor, human rights activist, lawyer and former Convener of Save Nigeria Group. He was the Vice Presidential candidate to General Muhammadu Buhari in 2011 and he needs no introduction to many Nigerians both at home and abroad.

This ‘fire-spitting’ pastor came to Glasgow on Saturday(August 18, 2018) to discuss ideas with Scotland-based Nigerians(see attached posters) under the platforms of African Forum Scotland and Association of Nigerians in Scotland.

Bakare spoke extensively on the theme of the event: A new Nigeria re-engineered, the role of the diaspora. He reads from a speech where he carefully analyzed how some former African dictators plundered the resources of their respective countries as poverty ravages the African continent. 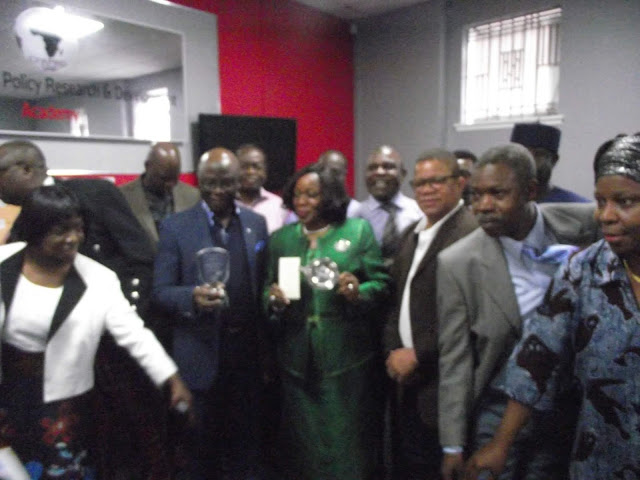 When challenged by some of the Nigerians in Scotland on his silence to criticise Buhari’s government on recent happenings in the country.

Bakare replied:” The Buhari I know will not steal money. Buhari is my friend but I am not afraid to tell him the truth. You don’t stab your friend in a public place.I know ways to reach out directly to Mr President. If you notice, I did not really start to criticise Buhari until January this year.I once told him that you cannot consider yourself as clean if you surround yourself with many unclean people.”

He also stated that  Buhari has up till September ending to repackage himself and by October 7 this year, he would tell the nation of his political move to salvage Nigeria. 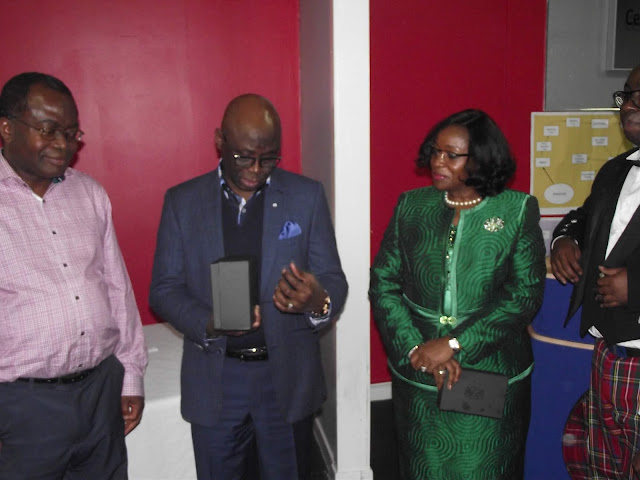 Bakare also told Nigerians in Scotland about his experience when he travelled to the United Arab Emirates in 1999. 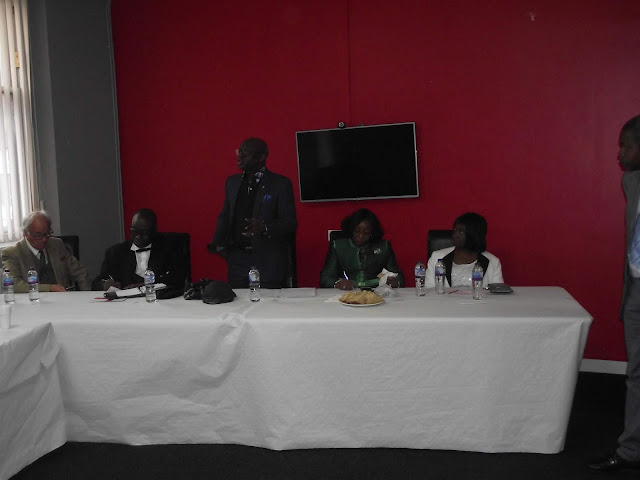 Bakare added that with the present system in Nigeria, Buhari must be ‘repackaged’ and he must sack some bad eggs in his government to win hearts of Nigerians for 2019 election.

“How can you defeat a current President with 25 governors as loyal supporters in 2019? All these governors want to win their re-elections next year. They also love power.”

Many Nigerians in the hall disagreed with Bakare’s position regarding Buhari’s re-election in 2019 because they felt enough is enough and the old soldier must step aside in 2019 to pave way for the younger generation of politicians with fresh ideas to move the country forward.

“If you sack Buhari, tell me the qualified Nigerians to take over from him? Please mention a single name and I will tell you what I know about them? Buhari  challenged Nigerians many times to point out anywhere his name is linked with corruption but nobody has ever come forward to prove any allegation against him.”

Omoyele Sowore came to my church to tell me of his presidential ambition and I told him the bitter truth. Student unionism or to engage in protests up and down is different from contesting for the post of President in Nigeria. Sowore does not have what it takes to be a President. I told him if he has little change(money) in his pocket, he must not waste it on any political ambition. What has Sowore done in his life apart from Sahara Reporters media platform?

Atiku is the most cosmopolitan Nigerian politician as of today.He has many friends and associates in every corner of the country. Can Atiku travel to  America and snap photographs in Washington DC and post on social media for all of us to see? He married from all the major ethnic groups in Nigeria, he is a WAZOBIA man. Even that Igbo lady(Atiku’s wife) who caused his problem in America is currently living in Dubai. Atiku is also popular in the North and can defeat Buhari.”

It is morally reprehensible for me to contest against Buhari in 2019, it is like destroying the house that I built with my hands. Buhari must be repackaged because the North wants to use their two terms as President. Chief Olusegun Obasanjo got elected two times and he nearly got the third term in office. Jonathan also tried to get a second term in 2015. I am giving Buhari till September ending for him to repackage and sack some bad eggs in his government and on October 7, I will declare my intention for all Nigerians.

He is an experienced politician but he is exposed, they know his ‘secrets’, and I told him myself. The power must remain in the North for another 4 years from 2019 for peace and progress of Nigeria.If we change Buhari in 2019, another Northerner would love to spend another 8 years in office.

He was a former CBN deputy governor who recently visited my church to tell me of his political ambition but his political party is not well-known. I told him “Moghalu, not yet your turn to rule Nigeria.” Former CBN Governor who is now the Emir of Kano only met Moghalu in one international conference in America, he employed him and invited him back to Nigeria to work at the Central Bank of Nigeria.

You know Osinbajo came through ‘arrangee’ system to join Buhari’s government, he is not a politician but a Professor of Law and a Pastor.  As if forced on Buhari just to win votes from Nigerian Christians.

The current governor or Kaduna state once stayed in my house and we discussed many political and personal issues. I wrote the foreword of his published book with the little information I knew about him then. I invited him from PDP to join CPC. When he was contesting for governor of Kaduna state, I contributed N160m for his electioneering campaign and he later paid me back. El-Rufai wanted my son to become the CEO/MD of one of his companies, I rejected the offer for some reasons.

Pastor Bakare argued that it is practically impossible for Buhari or any leader to Islamise or Christianise Nigeria.

“Nobody can Islamise or Christianise Nigeria, I can tell you authoritatively now. When I look at APC, it is a political party of strange bedfellows, that’s why you see defections here and there.No clear objectives and the manifesto is a charade and like a bird with one wing who cannot fly.I cannot put my integrity at stake for Buhari and his team.”

He passionately advised Nigerians in the diaspora to always think of how to contribute to the development of the country and not to get involved in illegal things that can lead to imprisonments and criminal records :

“No matter the level of your positions or achievements in the United Kingdom, USA or any parts of Europe, you’re still treated like second-class citizens because of the colour of your skins. I also have a British passport because my wife was born in England. We have our own personal house in London and America. I always love to live in Nigeria, to rebuild the country. When I briefly lived in London in 1994, I did not stay in a rented apartment. When people say we need a modern Nigeria, I always disagree because what we need is a new Nigeria because during my time in school, only people who could not afford to attend grammar schools always go to modern schools.”

Pastor Tunde Bakare also let the cats out of the bag as he explained some ‘behind-the-scenes’ political arrangements which finally produced a retired General Muhammadu Buhari for the fourth time in 2015.

“I once nominated Dr. Ngozi Okonjo-Iweala with her global experience as a world bank top staff to be the running mate to Buhari but he replied me:”The North will stone me to death if I pick a woman as my running mate. I also suggested a distinguished Lagos man(Jimi Agbaje) who once contested to become governor of Lagos state and even Dr. Oby Ekwesili but Buhari also rejected all of them.”

The clergyman-turned activist further stressed that Nigeria shall become a prosperous country if both Nigerians at home and in the diaspora  can sincerely contribute their positive efforts towards nation-building,

“I may have only one vote but I have many followers(not just on social media) who will listen and follow my advice on whom to vote for in 2019.”

Pastor Bakare also waxed philosophically as he took the audience into some of his dreams concerning some prominent Nigerians.

“I don’t know Mallam Nasir El-Rufai from Adam but in the year 2009, I was in Singapore, coming from a Leadership conference in Malaysia, I had a dream, I saw El-Rufai and myself near a river and he told me that he cannot swim, in this dream, I carried him in my back to swim across the river and as we got to the dry land, I showed him the direction to go. In another dream, Buhari was the driver of a Bolekaja commercial bus and I sat next to him in the front while Asiwaju Tinubu and others sat at the back, as Buhari was driving, he suddenly stopped the Bolekaja bus and asked for permission to urinate, to be honest, he did that many times during the campaigns, you know at seventy plus, you’re likely to visit toilets more frequently to empty your bladder. As Buhari dropped out of the bus to answer the call of nature, I noticed the vehicle was in bad shape, no steering wheel, no gears, no nothing. I then wondered how Buhari had managed to drive the car to that position without any problem. Nigeria is destined for greatness within 20 years from now.”

Pastor Bakare also disclosed that he did not benefit a single contract from President Buhari or any Nigerian politician till today.

“If I had joined Buhari’s government in 2015, some people would have wrongly accused me of enriching myself with public money as we are currently trying to build our international headquarter which will cost over N12 Billion naira.”

At the end of the event, Pastor Bakare was later presented with an award and decorated with the Fellowship of African Centre for research, policy and development in conjunction with the University of West of Scotland, Paisley.

He finally prayed for Nigerians in attendance and for the overall peace and progress of the country and photograph sessions with him and wife after collecting the awards. 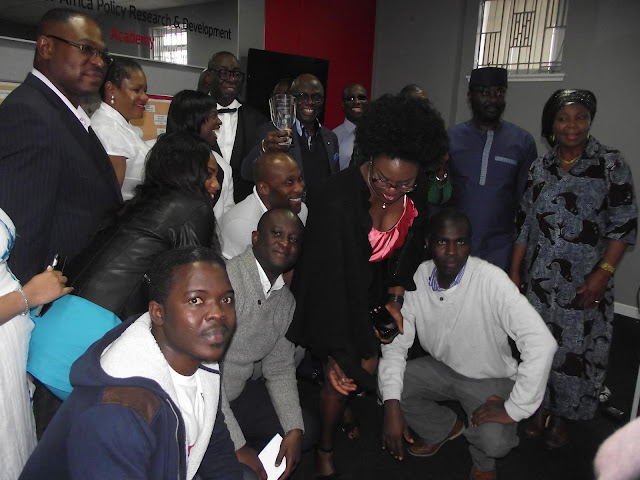 Pastor Tunde Bakare with some Nigerians in Glasgow.

****Why not advertise your products and services on this platform?

BREXIT: `LET’S COME TOGETHER,’ THERESA MAY APPEALS TO PARTY

BREXIT: `LET’S COME TOGETHER,’ THERESA MAY APPEALS TO PARTY

Prime Minister Theresa May on Sunday called on her party to unite behind her plan to leave the European Union,...

October 3, 2018
Copyright (c) 2018 - Dare Lasisi Online - All Rights Reserved
Back to top
error:
You Are Not Permitted To Copy Content of This Site. Contact The Admin