Edo election: Why I called Ize-Iyamu thief in 2016 – Oshiomhole [VIDEO]

Comrade Adams Oshiomhole, a former Governor of Edo State, has given reasons why he presented the governorship candidate of the All Progressives Congress, APC, Pastor Osagie Ize-Iyamu in a bad light in 2016.

Back then in 2016 while de-marketing Ize-Iyamu of the PDP, and promoting Godwin Obaseki his then ally and trusted candidate, Oshiomhole had said of Ize-Iyamu: “He has a very interesting lifestyle,

now because of a crisis of identity, he went to carry a bible and said he’s a pastor and born again.

“Now he rose, when he cannot dispute that the PDP government with Ize-Iyamu as Chief of Staff cannot build roads; cannot build schools; cannot do anything, he now says he cannot be blamed.

“Read today’s newspapers, Ize-Iyamu says he cannot be blamed for the failure of the Igbinedion government. So he agreed that the government failed but said he should not be blamed.

“Alright, if we will not blame him for the failure of the government of which he was the Chief of Staff and Secretary to the government, should that be a reason to promote him to the office of the Governor? He went on to say he has never been indicted in his life….”

However, speaking to a large crowd of people on Thursday, Oshiomhole, said he was only marketing his product back then when he called Ize-Iyamu a thief, adding that as a Governor, he never questioned Obaseki about his certificates.

According to him, “I have watched some videos where they are showing what I said about Pastor Ize-Iyamu when I was marketing Obaseki.

“Let me speak on that briefly. When you are selling Toyota, you cannot promote Mercedes. If you tell the people Mercedes is better they will not look at Toyota.

“I’ve heard some people saying how can a man who was qualified to be Governor in 2016 no longer be qualified in 2020? Now as a Governor I never had the course to ask ‘G.O, where are your certificates?” 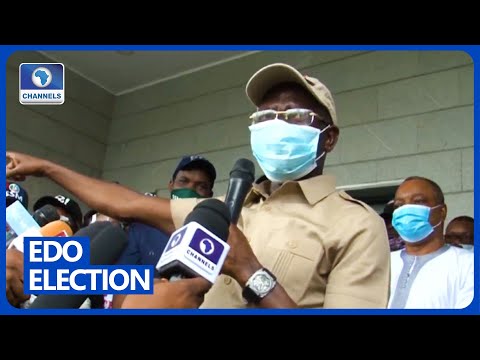 BBNaija 2020: My life would have been ruined if I attended UNILAG – Dorathy

BBNaija 2020: My life would have been ruined if I attended UNILAG – Dorathy

Big Brother Naija, BBNaija female housemate, Dorathy has said her life would have been ruined if she attended the University...

July 24, 2020
Copyright (c) 2018 - Dare Lasisi Online - All Rights Reserved
Back to top
error: Content is protected !!
You Are Not Permitted To Copy Content of This Site. Contact The Admin